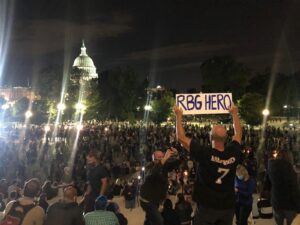 Like you, the BISC family is devastated by the passing of Supreme Court Justice Ruth Bader Ginsburg. Justice Ginsburg was a trailblazing civil rights lawyer who devoted her entire legal career to the pursuit of equal justice and eliminating discrimination of all types.

When Ruth Bader Ginsburg saw the intolerable — especially systemic racism and discrimination — she went to work. She possessed the type of character and resolve needed desperately in the world we live in: the courage and fortitude to continually break down America’s racist, sexist, and unethical attitudes and laws. We must go to work like Ruth.

Justice Ginsburg’s 27-year tenure on the Supreme Court was marked by her passion, extraordinary record and inspiring and powerful dissents, many of which she delivered from the bench. Those dissents included the voting rights decision of Shelby County v. Holder, the gender equity case of Ledbetter v. Goodyear Tire Company Co., and the affirmative action case of Ricci v. Stefano.

Justice Ginsburg was also no stranger to upholding direct democracy. In 1999, she wrote the majority opinion in Buckley v. American Constitutional Law Foundation, which attempted to limit access to the Colorado ballot initiative process stating, “We must be vigilant, to guard against undue hindrances to political conversations and the exchange of ideas.” And in 2015, she wrote the majority opinion in Arizona State Legislature v. Arizona Independent Redistricting Commission, which challenged voter-approved Prop 106, which amended the state constitution to remove the congressional redistricting power from the legislature. She understood the vital role ballot measures play in giving people a voice in our democracy.

At BISC, we acknowledge that Justice Ginsburgs’ words ring truer now more than ever: “Fight for the things you care about but do it in a way that will lead others to join you.”

Although we are devastated, we will not fall into despair. We will keep fighting like RBG. Until the end.

The Ballot Initiative Strategy Center (BISC) leverages ballot measures across the United States as part of a larger movement to strengthen democracy, center people of color, queer, low-income, immigrant, indigenous and other marginalized communities, move towards racial equity, build and transform power, and galvanize a new progressive base. We lead by supporting the use of ballot measures as a tool for transformational impact, not just in a measure’s outcomes, but at every stage of the ballot measure process—from policy development, signature gathering, civic engagement, the campaign itself, implementation and beyond.