As of today, BISC is monitoring 145 bills to change the ballot measure process in 32 states. 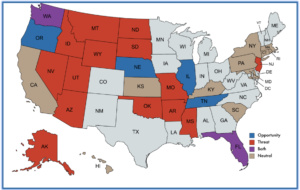 ATTACKS ON THE BALLOT MEASURE PROCESS:

These attacks have been increasing since the 2016 election, as state lawmakers in Republican-led states want to take the tool of direct democracy away from the People. The attacks against the ballot measure process are coordinated, and they are becoming more nuanced, more sophisticated, and would have deeper impacts on the initiative process.

Now, GOP legislators are enacting legislation to make the ballot process harder to access while also engaging in direct efforts to repeal the will of the voters after ballot measures have already been passed. The Republican State Leadership Committee has asserted its determination to make sure ballot measures are no longer a viable tool for progressives.

Progressive policies are passing at the ballot in Red, Blue, and Purple states such as Florida, Arizona, Missouri, and Montana. Through the power of direct democracy, the People are transforming power, advancing racial equity, and galvanizing a new progressive base. Through the ballot and the legislature, citizens have passed policies such as:

BALLOT MEASURE THREATS ON OUR RADAR

There are a large number of direct democracy attacks in Arizona, Florida, Missouri, Montana, Oklahoma, and Utah. Three of the top threats BISC is tracking include:

Mississippi: The Mississippi Supreme Court struck down the state’s constitutional ballot initiative process on a technicality in order to block the state’s recently passed medical marijuana initiative, Initiative 65, which was passed by 74% of Mississippians. The state Supreme Court’s decision is one of the greatest attacks on direct democracy in American history and a major blow for democracy.

Missouri: During the 2021 legislative session, 22 threats to direct democracy  were introduced by state legislators in Missouri. The Missouri legislature also passed their budget without providing funding for Medicaid Expansion, even though Missouri voters approved a ballot  measure to expand Medicaid in 2020. Last week, Missouri’s Medicaid Expansion initiative was ruled unconstitutional by a Cole County Circuit judge. The issue is now headed to the Missouri Supreme Court.

Arizona: Eleven bills have been introduced that seek to limit and create barriers to the ballot process in Arizona. Of those, two are still under consideration and could be referred to voters for approval. Areas of attack on the ballot measure process include: creating a single subject requirement, enacting a 60% voter approval threshold, requiring two-thirds voter approval for tax increases, and creation of legislative alteration and judicial override powers of ballot initiative passed.

Trends from the Bench:

BISC is currently monitoring 11 Legal Challenges across 10 states in various stages of litigation. There are three key types of legal challenges BISC is monitoring:

Implementation: Legal challenge to halt or alter implementation of successful ballot measure. For example, in Montana and Mississippi there is currently an ongoing lawsuit to block marijuana legalization.

Campaign: Legal challenge to halt or delay progress of ballot measure campaign. For example, in Michigan there is a lawsuit to disqualify the anti-emergency powers measure. Legislation: Legal challenge to repeal or delay legislation altering ballot measure process. For example, direct democracy advocates in states like Idaho, Florida, Ohio, and Missouri are suing to block laws that undermine the ballot initiative process such as a 60% voter approval threshold, onerous circulator requirements, and individual contribution limits.

In recent years, the ballot initiative process itself has been under attack by GOP lawmakers looking to restrict direct democracy by overturning ballot initiative decisions after they have already been voted on, and implementing a web of technicalities and hurdles that would make it impossible for grassroots communities to qualify ballot measures.

The concerted conservative effort to limit the ballot initiative process is part of a larger movement by Republican legislators to undermine democracy. We have seen similarly high levels of attacks this legislative session in the form of voter suppression laws, attempts to remove Governors’ emergency powers, attacks on the freedom to protest, and more. Overall, there is a clear connection to ballot process attacks in states with GOP majorities where progressive policy has recently passed at the ballot.

This year, we are seeing more sophistication in the policies being proposed.  Our opposition is more organized. They have more legislative sponsors and they are introducing parallel bills in both chambers.  They are finding statutory paths to pass new policies rather than having to send these decisions to voters through constitutional amendments.

We are also seeing a trend in bills relating to government authority in the ballot measure process including language content/development and the ability of the legislature to alter ballot measures after they are approved by voters.

We now have a view of the 2022 ballot measure landscape, and we expect the attacks on democracy to continue throughout the next legislative session.  Many voting access, freedom to protest, and initiative process bills have and will continue to pass in the coming weeks and in the 2022 legislative session.  We will also see these issues on the ballot in many states in 2022 as legislators refer democracy attack amendments to voters.

For more information on our analysis or to schedule an interview with one of our policy experts, please contact our Strategic Communications Director, Caroline Sanchez Avakian at [email protected].